Our Story So Far

Highgate Air has been “keeping it cool” for the past 50 years! This multi-generational family company is celebrating half a century in business in 2019. The Highgate Air story is about how the Joyce family built a thriving automotive A/C supplier business in Australia. It is a story of honesty, loyalty, humility and excellence.

Much like the popular 70’s hairstyle the mullet, it was all “business in the front” and “party at the back” at Highgate Air’s first home in Kent Town in 1969 and the early 70’s. Tucked behind the main building was the workshop; a 2 car tin garage, whilst the main building housed the reception area, sewing machines and a business manufacturing  car seat covers!

In 1969, after market A/C systems were fitted for $475 - the equivalent of $5,630 today! In those days, aftermarket fitted air conditioning units were a luxury (some filled up half the boot!). The first mechanics of Highgate Air would install  A/C systems during the warmer months and convert left hand drive vehicles to right hand drive in the colder months, to keep busy. It was a humble beginning with a lot of potential. 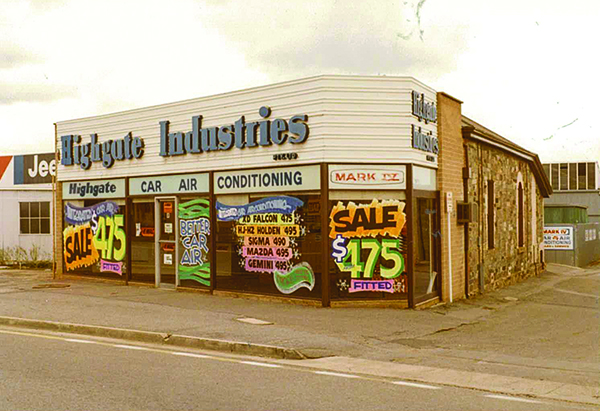 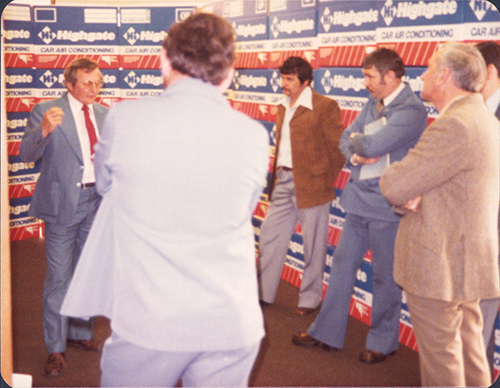 The Australian manufacture of cars peaked in the 70’s, with almost half a million cars produced per year in those days. Highgate Air had outgrown Kent Town and its 2 car tin garage, and the second installation workshop opened in 1979 in Edwardstown. This then became the hub for wholesale stock, as well as a busy installation workshop for Ford, Chrysler and other dealers nearby.

Shortly after, another premises was purchased in Gilbert Street and a new workshop commenced, making a total of 3 workshops running at the same time. Later, as the wholesale side of the business grew, the Kent Town and Edwardstown installation centres were closed.

It was the workshop at Gilbert Street, where the four sons of Warwick Joyce; Brad, Daniel, Simon and Martin, would start their journey with Highgate Air.

For the four young boys, a mechanic’s workshop was the ultimate playground and became the platform upon which their childhood unfolded. Martin remembers getting rides on the pallet truck (OH&S not being what it is today) and being fascinated by the tools and service stations along the walls.

He wouldn’t have picked it then, but the plumbed charge and recovery stations along the workshop walls were a big innovation in the industry at the time, and innovation would become an overarching theme in life at Highgate Air.

Aside from the infamous pallet truck, there was no such thing as a free ride in the Joyce family. Daniel, now Head of Operations, recounts his time as a kid labelling receiver driers in 40+ degree heat. Counting out O-rings, decanting oil and flush, and sweeping floors were the usual past times in school holidays.

The Fork in the Road

In 1996 the brand new offices and a 1000sqm warehouse at Richmond were built, and later Highgate Air made the strategic decision to go wholesale only, closing the doors on the last workshop on Gilbert Street. Like standing at the proverbial fork in the road, Warwick reflects;

“The journey hasn’t been without its challenges. Walking the line between being conservative and knowing the right time to take a calculated risk and making a serious change in the business isn’t always clear cut.”

As it were, reducing the focus down to wholesale supply only, opened up a world of opportunities.

“We were able to really hone in on what’s important to our customer – not only that but we understood it on another level, having been on the other side of the tools ourselves,” says Brad Joyce.

It is the focus of Highgate Air and technical expertise that would become one of the most appreciated things about the business from the customers point of view.

As business grew, so did the team. Simon is fond of quoting, “change is hard at first, messy in the middle, and gorgeous at the end.” Simon emphasises that we don’t practise change for the sake of change – every decision is made with our customers and teams’ best interests at heart.

Whether implementing new business tools, creating new platforms for customer ordering, or just working out how to use the new office coffee machine (an essential!) – the team have found this “hard, messy, gorgeous” flow to be true time and time again!

In late 2007, Martin officially joined the business full time, rounding out the fourth and last brother into the family business. Working his way up to his current role of Sales Director, Martin has seen the business through some big industry advances, including the introduction of R1234yf, electronic variable and direct drive compressors.

“The biggest learning curve for me was the technical side of things to cover the huge range of applications our customers work on. No two enquiries are the same; you could be having a conversation about a fleet of Caterpillar dump trucks one minute, and a Smart car the next. Some problems are very complex, and the solutions have to be creative!”

It took 18 months for Highgate Air’s new home to be constructed, literally backing onto SA’s innovation hub at Tonsley. The move to 10 Selgar Avenue in 2016 represented a new chapter for Highgate Air on a personal and professional level. The warehouse space and team numbers more than doubled. With rapid expansion, it became crucial to ensure we have enough fuel to run the engine.

“We take each and every one’s contribution and welfare very seriously and with much gratitude. It is vital to us that our team feel valued and happy at work.” says Daniel Joyce.

Together as a team Highgate Air has been able to achieve a lot for its customers in the last 2 years, including the complete overhaul of the website, new parts searches (Ag & Heavy Duty, VIN Search) and apps for iOS and android. We make it easier for customers to find what they need on the go and order 24/7.

Behind the scenes, there is an “open door policy”, celebrations for birthdays and anniversaries (over 50 cakes a year!), strategy days to share the company vision and free lunch on Friday’s. We also have the “High-Cura Hero” monthly team recognition program. In a busy world, it’s our way of recognising and rewarding exceptional work.

For us, the “behind the scenes” shapes our customer service and level of care, becoming a natural extension of our company values of honesty, loyalty, humility and excellence. We work together as a team, where success is defined by our customers success.

Perhaps another 50 years from now, when Highgate Air is 100 years old, the grandkids of the current generation will be writing the next chapter of the story - celebrating a century! Many things would have changed by then but those founding family values will remain.

A heartfelt thank you


From our Highgate Air family to yours, we want to thank each and every person who has been on this incredible journey with us over the past 50 years, and we look forward to everything yet to come!